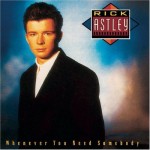 Title – Whenever You Need Somebody

Yeah, I know, old meme is old and we’ve all been rickrolled over 9000 times already. We really don’t need to talk about Rick Astley any moar, but as far as i’m concerned, haters gonna hate. So while I haz your attention, I’m gonna ask a question: Has anyone really been far even as decided to use even go want to do look more like? Because….um..uhh….okay, that’s enough obligatory 4chan memes (but I did briefly consider writing this entire post in Impact).

In case you have been living under a rock for the past three years, Rickrolling was an internet fad where you trick people into a clicking a link to the YouTube video of “Never Gonna Give You Up” by Rick Astley. The purported humor lies in the intense eighties-ness of the song and the general incongruity of suddenly viewing a scrawny red haired Englishman awkwardly gyrating in front of a chain link fence instead of that funny cat video your friend promised. This prank was intensely popular throughout 2008; it became the theme song for Anonymous (the ad-hoc group of Guy Fawkes mask wearing basement residents who surface in public to protest Scientology, of all things), the target of online poll spamming to get it played at Mets games, and finally culminated in Astley himself lip syncing the song during the Macy’s Thanksgiving Day Parade.

I gotta be honest , I’ve only listened to the first half of this record so far and I don’t really plan on even attempting the B side unless under extreme duress or extreme intoxication. Like all of Astley’s oeuvre, it consists of competent but uncompelling dance-R&B constructed on synth equipment that sounds charmingly dated to modern listeners. But even before Rickrolling was a thing I unironically enjoyed “Never Gonna Give You Up” and to this day maintain that it is a corny but solid pop song, despite all the jokey baggage it accumulated thanks to Family Guy and the Internet. 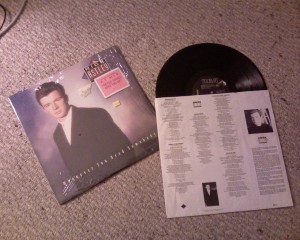 Like most mass-market LPs, this album comes on thin, floppy vinyl. The inner sleeve is printed with lyrics, credits, and several B&W portraits of the man himself. Drop the needle on Side A and that opening drum fill we’re all too familiar with bursts out the speakers with surprising depth. In fact, the tracks I’ve listened to so far have a fairly rich and detailed sound for something that was likely recorded on some crummy 16-bit Sony DASH machine. However, it’s still difficult to judge the sonic properties of electronic music like Astley’s because drum machines and synths don’t “exist” in an acoustic space, they are dumped straight to their recording medium instead of being miked in a studio.

In about 10-15 years when we’re all grown up, Rickrolling will officially count as nostalgia. If you have this album on vinyl by then, you can put it on during one of your yuppie wine & cheese parties and smugly revel in the fact that you just Rickrolled your friends…IN ANALOG! The guests geeky enough to remember the joke will briefly laugh and reminisce about various other dumb memes from a youth wasted online, while those who don’t get it will just shrug and go back to their Pinot Noir. To prepare yourself for that day, Amazon has used copies starting at just under five bucks

, or you could probably find it at your local record store like I did.