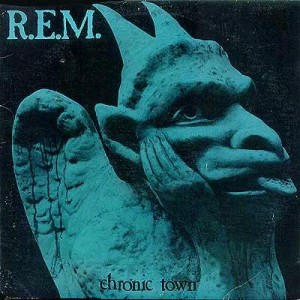 Short record, short review. This five song EP was R.E.M.’s first major release after their 1981 single “Radio Free Europe” (and that single sounds a hell of a lot different than the album version they put out a few years later).

I picked this up for $12.50 at Joe’s Record Paradise in Silver Spring, MD, a shop I used to visit at their old Rockville location before I left for college. The record is in good shape with quiet grooves, although i’m pissed at myself for damaging the sleeve when peeling off the pricetag. With the needle down, the guitars ring and chime appropriately and Stipe’s mumbling follows suit. Bill Berry’s drumming on the first few tracks, especially on “Carnival of Sorts (Box Cars)” are really muted and indistinct; the cymbals mush together and sound like those maracas you made out of an oatmeal box filled with rice back in 2nd grade art class. Side B’s percussion has much better definition and push, but the cymbals are still kinda dialed down. I guess we can’t really expect world-class sonics from a debut EP.

Acoustic flaws aside, this is an excellent first record that nicely lays out the style they pursue on their next two LPs.  Some smug British dude wrote that R.E.M.’s stuff from the first half of the eighties was just Stipe “…mumbling gibberish into his fringe over tinny old Byrds riffs”, but I think that their work from that period was some of their best. Everything after Monster is entirely forgettable. Speaking of irrelevant musicians, Stipe should team up with Moby and do a tour of bald vegan white dudes with serious opinions about things.