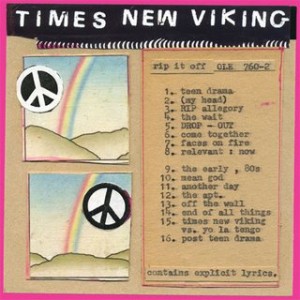 Title – Rip It Off

Finally, I’m reviewing an album that isn’t from the 1980’s ! Times New Viking is a loud as fuck lo-fi group from Columbus, Ohio. Now I know what you’re thinking : a lo-fi recording on a hi-fi system? Is it even fair to evaluate this on sonic grounds? Well, I picked up this record to hear how my system can handle an intentionally poor recording, and to also find out if a lo-fi band can still create a recording that is in some way acoustically remarkable.

I’ve “owned” this album in MP3 form for a few years, so I am familiar with how earsplittingly hot and strident this recording is. Quite often it comes up during shuffle mode, causing me to wince and fumble for my iPod volume. Having experienced this, I lowered the tonearm on Side A expecting Teen Drama to explode out of the speakers. Strangely, and somewhat disappointingly, I wasn’t blown backward like the Maxell guy. The music buzzes and blares but makes no attempt to go forward, politely making a din at a reasonable distance. On the back of the album cover reads the advice “please play loud”, which didn’t help much when I tried. Everything is mostly the same volume. The drums sounds like someone hitting cardboard boxes. No bass frequencies to speak of. Just one constant midrangey howl.

Some of the tunes are really catchy, e.g. DROP-OUT and RIP allegory, but the rest of the album sounds like short Dinosaur Jr. songs with broken equipment and forced indie affectations. The packaging is cool, if you dig played out typewriter and collage motifs. There’s a “contains explicit lyrics” warning on the front, which I found very amusing.

I put this record on expecting shit, I accept this, but I thought it would be shit with some feeling of engagement or presence. It offers little improvement over the MP3 copies (and the album comes with a coupon for the free downloads if you want them). Buy the album here for around 20 bucks

if you want some hipster cred (which is a new grade I’m adding to my reviews from now on). At least it’s on 180 gram vinyl.