Way back in 2010 I wrote up a little buyers guide to an affordable Hi-Fi system . Some of what I wrote still stands but I think now is a good time to revisit this topic and come up with something for 2017.

Your audio system will need the following things at minimum:

– A source. In this guide I will focus on a turntable; digital sources I plan to cover another time.
– An amplifier. This is the spine of your system. We could go in to a rabbit hole of preamplifiers & power amps but for now all you will need is an integrated amp that combines both of these in to single box.
– Speakers. I believe that the speakers have the most immediate and noticeable affect on the sound, but are also the choice most subject to personal taste.

You will also need speaker wire and interconnects, but these are the least important purchase and I will cover them near the end.

For playing vinyl records, I recommend that you go with the Pro-Ject Debut Carbon DC , which comes in at just under $390. This is the successor to the Pro-Ject Debut II that I bought back in 2005 and are still using to this day. Both Amazon purchasers and professional reviewers give it high marks. For me, the draw is that it already comes with a Ortofon 2M Red cartridge pre-installed (for the uninitiated, the cartridge holds the stylus, the bit that reads the records grooves) and is further upgradable to a wide variety of cartridges should yours wear out or you want an improved sound.

In my last review, I specifically recommended an integrated amplifier that has a built-in “phono stage”, that is, a circuit that boosts the relatively weak signal from a turntable up to something the rest of the amplifier can handle. Remarkably few amplifiers at the lower end of the price scale offer this option, so as before, I will again recommend the Cambridge Audio Topaz AM10 to build your system on. In addition to the phono stage, it has 4 other inputs on the rear to connect your TV, an old tape deck, or a CD player. There is also a 3.5MM jack on the front to connect a smartphone or iPod (do people still use these) with a so-called “AUX cord”. Finally, it’s capped off with a headphone jack so you can listen to shameful 90s radio-friendly alt rock and keep it a secret. The Topaz AM10 comes in at $299.

We still have nearly $700 to work with on speakers, and this is a place we definitely don’t want to cheap out on. The issue with speakers is that I generally wouldn’t recommend buying them online, instead encouraging you to visit your local hi-fi dealer (they are still around), listen for yourself, and buy them there. But if you are reading this and just want to get listening, there are a couple choices. The Polk Audio TSi200 from my last guide are still a solid option. The KEF Q300B bookshelf speakers are loved by online purchasers and pro reviewers alike. These come in at $399 and are excellent value for the money. To keep the total under $1k, you can go for the Polks ,but if you don’t mind going a bit over then go for the KEFs.

The term “Bookshelf speaker” is a misnomer; any speaker of this size should not be crammed on a shelf and instead should be placed on a pair of decent stands, such as these ones for $40.

As long as you aren’t using the cheapest, pack-in connections available, cables don’t really matter. There is an entire industry of high-end speaker wire and interconnects which only exists to defraud the ultra rich and ultra deluded. Fifty feet of speaker wire for $8.49 will more than suffice . As for interconnects (RCA cables), these will do just fine.

-A digital stylus force gauge is handy for re-calibrating the amount of pressure that the stylus applies to your precious records. It is best to set this to whatever the stylus manufacturer recommends; both settings that are too light or too heavy can damage the vinyl and/or disrupt the sound. I use this one and is a bargain at $13 .
– Record cleaner: I’ve had bad luck with wet cleaners that use fluids, for that sort of deep cleaning you really need a dedicated machine which generally costs over 500 bucks. Instead, I now use the In The Groove record roller , which is a simple, sticky roller that picks up all the dust and hair easily. Just give it a pass over your record right before play.

Right below my target goal! Of course, this doesn’t include shipping & taxes, but this should give you an idea of what to spend when you are building out your first hi-fi system. This setup will give you listening enjoyment right out the box and give you room to expand and upgrade.

Think I’m crazy? You can do better with a $1000 budget? I would like to see other takes on a budget setup, so I challenge you to put a list together and leave it in the comments.

One of the major topics of this blog is affordable audio, so i’ve decided to put together a reasonable priced system for playing vinyl records. These recommendations are just starting points, and I would encourage you to substitute components for any vintage or used stuff you might find. You can always upgrade later, the point now is to start spinning records as soon as possible.

Basically, a hifi stereo setup involves three parts: the source(s), amplifier and speakers. There are a variety of other sources possible (CD/SACD players, iPods, computers, etc) but for now we’ll stick to a turntable. You probably already own a MP3 or CD player anyway.

This is the table I currently use, and I highly recommend it. Professional reviewers agree that it is a perfect entry level turntable for those curious about vinyl. Unlike other, more expensive turntables, it’s pretty much ready to go right out of the box and comes complete with a cartridge (the needle), tonearm, dust cover, felt record mat and attached L+R and grounding cables. The MSRP is currently $349, and there is a $499 version that includes a USB output so you can rip your records to your computer and convert them to MP3. Amazon

has it, and they can also be found at Magnolia outlets (which are often located in Best Buy stores).

The signal from a turntable must go through a preliminary stage of amplification before it can go to the main amp. This might be accomplished with a “phono stage” like the NAD PP-2

, which I use, but it is an additional expense, takes up more space and uses more resources. The solution is to use an amplifier that has an integrated phono stage, like the Topaz AM10. I haven’t listened to this particular amp, but Stereophile’s Stephen Mejias recommends this and it is the cheapest one of the four he lists in the linked article. In addition to the phono stage, it’s small, light, looks cool, and has a front input to plug in your iPod. Amazon’s got it for 349 dollars 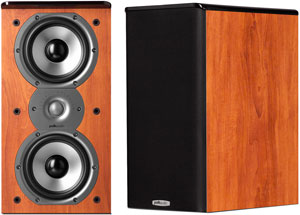 For beginners, floorstanders might not be the best idea, simply due to their size and expense (although you wouldn’t need to buy speaker stands). Bookshelf speakers are the optimal entry level solution. The problem with speakers is that they are the most subjective in terms of sound quality; what sounds good to me might sound awful to you. This is why it’s kind of difficult to recommend a good speaker without listening first, but sticking with established brands that specialize in making speakers is a good start. This means avoiding crap from Sony or Yamaha, which might be cheap but are of poor quality. Bose speakers have an undeserved reputation for quality thanks to aggressive marketing, but they are the laughing stock of the audiophile world. The Polk Audio TSi200

is available for about $300 a pair, or if you need to go cheaper then the Klipsch B-2 Synergy

is only a bit over $180. Either of these would work fine for a hi-fi-curious individual. A set of speaker stands can be found at most any big box store for 20-30 bucks, or you could DIY up some of your own.

Cables and other accessories – $50

I hear ya, that’s hardly pocket change. But as I mentioned in the beginning, this is only a suggestion. The best deal and the most important purchase is the Pro-ject turntable, I can’t really think of a better value for the money. The speakers can vary, if you already have a cheapo pair then use them to begin with. The amplifier is optional as well, in fact, if you browse vintage or thrift stores you shouldn’t have a problem finding a decent integrated amp. Most older (pre-1990s) amps that you’ll likely encounter have a phono stage; if it has an input on the back labeled “PHONO” then you’re good to go.

Every system has humble origins, and once you get into vinyl you’ll be hooked.